“Mom, Who Are You Voting For?”

Last night at dinner, the dinner conversation turned to politics, which is a new phenomenon since I’m apolitical. I don’t do politics. But I’ve somehow gone and married a man who is as political as I am not. He has views and strategies, agendas and plans, and he loves to talk about them. So I am learning. And now my dinner conversations involve names like Donald and Hillary.

The boys make bold statements about things they know very little about. Who is good, who is bad, whom they’d like for us to vote for based on whom we should be afraid of and why. They know just enough to be dangerous. Probably like most of us, I dare say.

Peter said, “Men, here is something that will be true at this dinner table: you can feel however you feel, and you’re welcome to any opinion. But you have to have a reason for it. You can’t just declare a viewpoint without knowing why you’ve made that decision. So if you make a statement about something you believe, I’m going to ask you to defend it.”

Tyler said he’d like for none of us to vote for Trump because if he becomes president, then one of his classmates is leaving the country. He’d like for his friend to stay in the United States, and preferably in his very own fourth grade classroom next year, so nobody is allowed to vote for Trump. And then he added, “And anyway, we should just vote for Hillary because she’s a girl, and that’s a whole new beginning. I mean, that’s history in the making, Mom. We should have a girl for president. That would be the first time.” All hail the beauty of raising boys who dig smart girls.

And then Tyler added, “Also, Trump wants to build a fence around our country to keep people out, and I think that’s a terrible thing.”

And Tuck said, “But also the Mexicans are sneaky and they try to get in and we should keep them out.”

And Tyler said, “They come for a month and they get their papers, but then they try to stay longer and it’s not fair or legal.”

Peter said, “Guys, let’s talk about this. Do you know what the word ‘immigration’ means?”

They heard the word ‘migration’ in that bigger word, which reminds them of the stingrays in Finding Dory (which you should see because we gave it all the thumbs up), who taught us that ‘migration’ means ‘going home.’

Peter said, “Yes, you’re right. And our country was founded by immigrants, people who came here from Europe because they wanted a better life than the one they had. And it has always been true that anyone from anywhere can come and live here, as long as they go about it the right way. They can come and apply for citizenship, and then they can live here if they are willing to pay taxes and follow the same rules that apply to all of us.”

Tyler said, “So, it’s kind of like getting on a cruise ship?”

We just got back from our honeymoon cruise, so discussions of cruises are all the rage at our house. The boys speak confidently, as if they themselves are Cruise People. Also, ever since our wedding reception, they have grown accustomed to raising their glasses and giving a toast. At nearly every meal, someone underage is giving a toast with his glass of milk, calling us all to raise our glasses in the name of families or for Peter or for all the dads in the world or ultimately for the good of mankind or for SpongeBob.

I couldn’t see how immigration issues are like a cruise ship, but I’ve learned to let him speak his analogies before I shut them down. “How is it like that?”

Click Here to read the rest of the dialogue in my PJ Media article:
How My Husband and I are Talking to Our Kids About the Election. 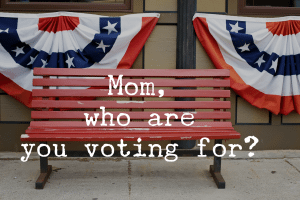 Get emails from Tricia

Tricia on Focus on the Family

You Can Do This

And Life Comes Back