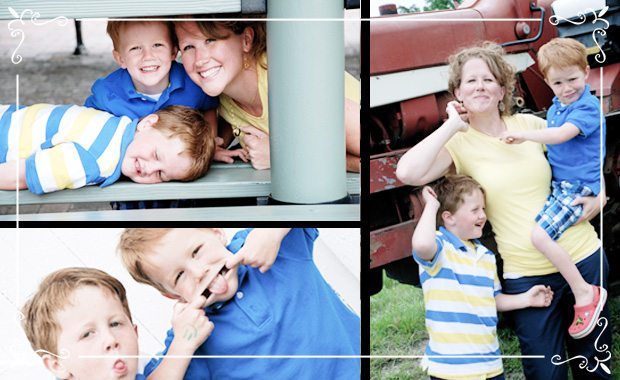 I used to talk to strangers all the time.  I made friends on airplanes, in restrooms, at stoplights, and in the produce department.  I used to be that girl.

Yesterday, we were at the park.  A mom nearby put her toddling baby girl down on the ground for her own play time, so I called to the boys to alert them of the new playmate.

I said to the mom, "They'll be very safe with her.  I just wanted them to know she's nearby so they don't hurt her on accident."

As if on cue, Tucker came over to this darling little person and handed her his matchbox car.  He got down on one knee, and he let her practice passing it back and forth with her developing pincer grasp.  "That's it, little girl.  Good job."

He approached the mom and said, "May I watch your baby while she plays?"

And Tucker was on it, a miniature babysitter in training.

The mom and I struck up conversation then, and she asked if these were my only two.  We talked about boys, girls, preschoolers, and the habits and behaviors therein.

She has a boy and a girl; they are vastly different.  Imagine.

I said, "Well, actually, I'm a young widow, so the testosterone level at my house is unnerving and overwhelming most of the time."

(Which is ridiculous logic in retrospect, since there would only be more testosterone if Robb were around.  But, whatever.  You say what you say.)

"Do you mind if I ask what happened?"

"No, not at all."  I gave her the short, polished version of the day my life fell apart.

When I began to talk about the undetected infection, she said, "Endocarditis?  Meningitis?"

She smiled and nodded.  Her interest and vocabulary gave her away.

"Actually, it was streptococcus pneumonia that went septic.  And it happened really fast.  He was sick for just twelve hours."

Oh, what a beautiful answer.  That's not fair.

"So you and your boys have had a rough year then."

And then she turned to me, looked me squarely in the eye.

Oh, to hear these words every day.  (Oh, to say them everyday. I must cultivate this habit in myself: to say more often to others, "You're doing such a great job.")

I thanked her.  And I made a new friend.  Because I talked to a stranger.

I've missed that girl, the one who was hidden away inside me.

8 comments on “Benefits in Strangers”