The Miracle of a Little Boy’s Lunch

Maybe it’s because I am forever a hostess at heart, and wherever there is a party there is also food a’ plenty. Or maybe it’s just because I love when a story comes to life, especially when I can get into the minds of the characters. Either way, whether I’m thinking with my head, my heart, or my stomach, I’ve fallen in love with the story of when Jesus feeds five thousand. It’s my current favorite. 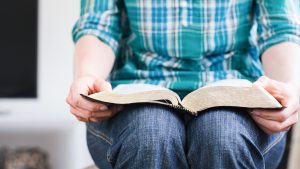 First, let’s look at the unabridged version as the experts have it written down, and then my color commentary of my very favorite things.

After this, Jesus went across the Sea of Galilee (some call it Tiberias). A huge crowd followed him, attracted by the miracles they had seen him do among the sick. When he got to the other side, he climbed a hill and sat down, surrounded by his disciples.

When Jesus looked out and saw that a large crowd had arrived, he said to Philip, “Where can we buy bread to feed these people?” He said this to stretch Philip’s faith. He already knew what he was going to do.

Philip answered, “Two hundred silver pieces wouldn’t be enough to buy bread for each person to get a piece.”

One of the disciples—it was Andrew, brother to Simon Peter—said, “There’s a little boy here who has five barley loaves and two fish. But that’s a drop in the bucket for a crowd like this.”

Jesus said, “Make the people sit down.” There was a nice carpet of green grass in this place. They sat down, about five thousand of them. Then Jesus took the bread and, having given thanks, gave it to those who were seated. He did the same with the fish. All ate as much as they wanted.

When the people had eaten their fill, he said to his disciples, “Gather the leftovers so nothing is wasted.” They went to work and filled twelve large baskets with leftovers from the five barley loaves.

Now here’s what I love. Straight from the top, Jesus shows me that there comes a time when you’ve just got to step away. The people couldn’t get enough of him and his firsthand miracles, and they followed him everywhere. He, the very one who could give them everything they wanted and needed, even knew he had to take care of himself. So he gathered the ones he trusted most, and he stepped away from the noise for a bit. My introverted heart reads this and breathes a sigh of gratitude.

But then the crowds show up again, because of course. Jesus asks Philip, “Where can we buy bread to feed all these people?” It’s the world’s earliest story problem. Jesus knows the answer, he already has a plan, but he gives Phillip the chance to be the hero with the right answer.

But Philip kind of misses the whole question. Jesus asked where they could buy bread, but Philip jumped straight to how much it would cost to feed this whole party crew. I have so much empathy for Phllip here, both because I’ve been the one to whom the math teacher has said, “Now, Tricia, go back and look at the question before you get carried away with the wrong answer,” and also because I’ve been the one saying to Jesus, “I think I hear what you’re saying, but don’t you realize how expensive this will be?”

As if Jesus needs me to a) create his budget, and b) tell him what to do. 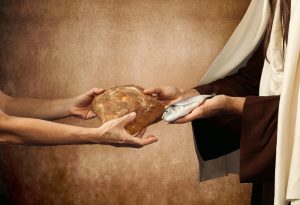 Can you just imagine how they must have laughed because they were so joyfully incredulous? They must have thought he was finished, there could be no more, and yet there is more. Because that’s the thing about Jesus and how he loves: there is just always more.

And then, I love how Jesus calls forth his inner kindergarten teacher, how he asks them all to sit down on the green carpet, and then he gives treats to those who have followed directions.

But even with that long list of things I’m learning, we haven’t yet talked about my favorite part, my favorite character, because she’s actually not even listed in the story.

Somewhere behind the story of when Jesus fed five thousand, there’s a mom who packed a simple lunch for her son.

Somewhere in the hidden history of Bible times, a mom packed a lunch for her son before he left home that morning. She was simply taking care of her boy, and she couldn’t know that Jesus would turn that silent work of her hands, the gifts from her kitchen, and her faithful love for her son, into one of his greatest miracles.

And that, that right there, is my favorite part. Don’t miss it, Moms and Dads, especially you who are tired and unnoticed.  You just never know what he’s up to with the little somethings you have to give.

Get emails from Tricia

Tricia on Focus on the Family

You Can Do This

And Life Comes Back